Zombies, Apparatus, and the Image of the Nation: pt.1 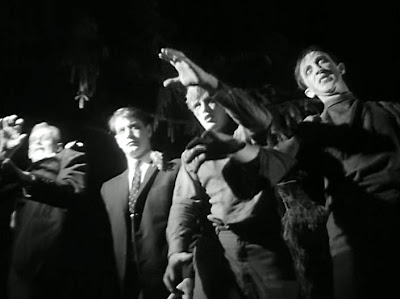 Zombies, Apparatus, and the image of the nation

Franco Moretti once claimed that the two seminal ‘monsters’ ( from ‘de-monstrare’, a showing forth, demonstration) for modernity – and the West — were Frankenstein and Dracula; Frankenstein represented the monster of production turned loose on itself (made up, collaged together, bricoleur, odds and ends gathered and forced to articulate), all subjectivity being turned on a lathe, so to speak, constructed out of numerous parts and sources. The other side of that early industrial model of life and literature was Dracula, a monster who fed on desire and subsisted in the shadow of that other industrial monster, the one based on overweening scientific hubris.
(The book that alludes to these analogies is SIGNS TAKEN FOR WONDER, published in 1983). His new work however is based on quantitative sociological analysis –he works with the history of the novel– and became controversial.

His new book on graphs, trees and grids as a way to track literature would suggest zombie (systems of analysis, protocols) — has supplanted has supplanted those early monsters. Nowadays though, zombies are everywhere – just like the idea of the apparatus is everywhere and controls what we can see, where we can go —and perhaps who we can be.

If the Frankenstein monster maintains life at any cost, taking apart other bodies and lives to do it, so does Dracula sustain life at the cost of death—or vice versa. But the zombie sustains itself in the stroke between life/death, feeding on both death AND life…just as an ‘apparatus’ does in its most formal presentation. ‘Zombie banks’ anyone? These things live inside us now; and in fact we are unable to separate ourselves from them. (‘Debt’ and the monetary system in particular seeming to form quite dense nests). The zombie IS a sort of apparatus – or rather, is you wish to be less literal, forms the latest incarnation of monstrosity, or a showing forth of the inner workings of human articulations.

And another thing that points to the zombie being an apparatchik: the previous monstrations had their original in canonical texts by Mary Shelly and Bram Stoker, there is no text per se at all for the zombie. First came the image and the concept (I think; if this is not the case and there WAS an ur-text for the zombie let me know) via contact with some tribal cultures (i.e. Haiti) but in industrial cultures, contact came through another apparatus, movies and later video, both are systems of image representation supported by large apparatuses of workmen (see, e.g., Walter Benjamin’s Art in the Age of Mechanical Reproduction).

But perhaps in some sense, we have never been alive, perhaps life has always had a zombified aspect to it: being inhabited/possessed by another system, our ‘consciousness’ (and what exactly IS that anyway?) a phenomenal result of the clash of of those internalities.

Don’t we already ‘live’ in this place of the resurrected dead, you and I? Sluggishly (or rapidly it could be we now think also) moving over the landscape waiting for the big break, the big event, or maybe just any event which wold release us from the inhabitation of the stroke between life/death.

Perhaps we have always been zombies.