‘The Stars My Destination’

Posted on November 5, 2015 in Uncategorized 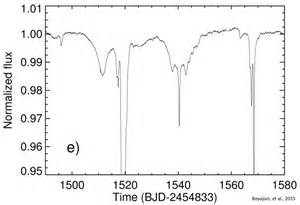 He had been a fan of speculative fiction for as long as he had been reading books. For as long as he could remember thoughts of the ‘vast cold and indifferent’ (from the opening words to H.G. Wells War of the Worlds) spaces had been a tonic and security blanket for him. (And actually such writing then was called science fiction, in retrospect a gray collar genre that filled the thoughts of many young men in smsall towns allacross the country during the fifities and early sixties with dreams of going to technical colleges – like the Georgia Institute of Technology – and becoming the one to make the mythical First Contact with an alien species or at least to come across mysterious alien ruins like the Hee Chee or the just as mysterious worlds of Arthur C. Clarke, especially Rendezvous With Rama and the just as equally astonishing – in terms of deep time anyway -The City and the Stars. And there were hundreds more exploring similar frames of referencle, certainly enough to give Claude Levi-Strauss enough to draw up a structuralist study of scifi. And he thinks back to perhaps the first ‘sci-fi’ book he ever read which had to have been Margery Cameron’s The Flight to the Wonderful Mushroom Planet.  But first there was the incredible The Stars My Destination by Alfred Bester as the New Wave of science fiction burst upon the scene and the site of speculation became any and everything. And now we iare in what could be called the Third Wave of science fiction where speculative intensity has spread throughout moder culture, especially but not limited to Western modernism. Fueled by the entertainment industry, and the academy to some extent, given all the cultural studies programs extant, the absorption into mainstream technical culture has been nothing short of astounding, with pop music and visuals taking the ‘alien’ as a baseline of departure. All of these tropes are now rocking many established sciences)

No wonder then that the net has triggered a deluge of items dealing with liminal, eldritch, chthonic, or just weird as lived uncanny circumstances. Yes we have gone from the sublime to the uncanny in a mere 100 years.

All of this is on his mind as he reads the latest news of a star scientists have discovered that is some 1480 light years from the earth which and which seems to have an orbiting mega-complex. Astronomers call it Tabby’s Star after the researcher who discovered it but it’s nomenclature is KIC 8462852. Some researches have a tagline that leaves open the gate to words like extraterrestrial civilization and Dyson Sphere.

All we can do is wait, as culture and life become even more saturated—and uncanny.