The Piper At the Gates of Dawn

Posted on November 19, 2015 in Uncategorized 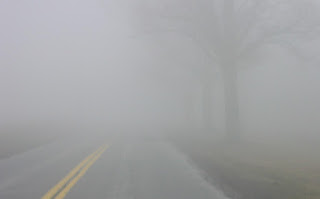 If the medieval concept of Humours was still available, Mississippi would undoubtedly belong to the one which indicated wetness, from the mighty river itself to torrential rain to fog. This morning the fog was so thick you couldn’t see past fifty feet, a sodden gray haze even after the sun was well up in the sky. (The Wikipedia definition of the associated watery temperament, the phlegmatic has it thusly:

“The phlegmatic temperament is traditionally associated with water. People with this temperament may be inward and private, thoughtful, reasonable, calm, patient, caring, and tolerant. They tend to have a rich inner life, seek a quiet, peaceful atmosphere, and be content with themselves. They tend to be steadfast, consistent in their habits, and thus steady and faithful friends.
Pedagogically, their interest is often awakened by experiencing others’ interest in a subject.
People of this temperament may appear somewhat ponderous or clumsy. Their speech tends to be slow or appear hesitant.”)

The day started with some odd coincidences starting with last night. He had been re-reading Don Delillo’s fabulous novel White Noise again for some reason (after having read it when it first came out). He had planned to write a entry today on periodicity–styles, fashion, just the need to change in seemingly ten-ish year cycles  more so perhaps in the city than in The Town (as opposed to the city) when he came across the Delillo passage below:

“It is the nature and pleasure of townspeople to distrust the city. All the guiding principle that might flow from a center of ideas and cultural energies are regarded as corrupt, on or another kind of pornography. This is how it is with towns.

But Blacksmith is nowhere near a large city. We don’t feel threatened and aggrieved in quite the same way other towns do. We’re not smack in the path of history and its contaminations. If our complaints have a focal point, it would have to be the TV set, where the outer torment lurks, causing fears and secret desires.”

Yes, he thought that was the way it was for sure more at one time than now…but still. Although the point of contamination was more the World Wide Web now and maybe Mcluhans’s idea of a coming paganism or tribalism due to the electronic soup we are creating is more pertinent.

But that leads him to the second, more interesting coincidence (the first one could hardly be called that).  As he lay tossing and turning last night around the magic hour of three pm, an inchoate train of thought began. As was often the case these late night/early morning jumbled thoughts often had to do with the anxiety of having taken a wrong path, made bad decisions. He began to think of the sixties, when the train began to leave one track and head for open field. He thought maybe music was responsible in some way. He certainly had an intense interest in it, all consuming in some respects. He began thinking of the pied piper of Hamelin, the old fairy tale. He wondered what ‘pied’ meant in that case. This morning as he was going though his net chores and web site checks, he clicked on the EsoterX site where this was the current entry. And then he remembered his book The Doll Universe and the Arthur C. Clarke book Childhood’s End.
And he woke up
and it was foggy
and he didn’t know where he was.
https://www.youtube.com/watch?v=h99WP2KUvLA