Posted on November 5, 2009 in art installation 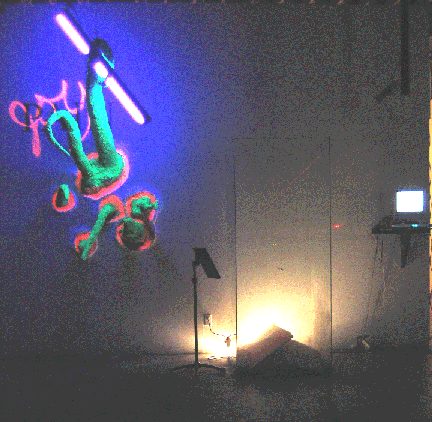 In the recent Korean film ‘Old Boy,’ the protagonist is put into solitary confinement for 15 years, with nothing but popular television for entertainment. When he escapes, the pivot scene happens when he stops into a sushi bar and orders something live. He is delivered a live octopus that he maniacally consumes, then falls into a swoon. Thus begins a switch into another symbolic level of (in)operability, signaled by the omnipresent signifier of radical otherness, the tentacle. (As a hint: the film very cleverly plays off the relations between ‘octopus’ and ‘Oedipus,’ both entities signposts of coming forbidden liminal states.)

‘Tentacularity’ is always a spectacular gateway to various extremes of otherness in cultural representations, a representation of that which is furthest from the human and which is always portrayed as a monstrous collapse into a regime at destructive odds with the human. The most well known popular representative of this visual motif is the portrayal of the aliens’ craft in the recent film ‘War of the Worlds’’

One can be sure that the arrival of the tentacle is also the arrival of the inhuman and uncanny in opposition to the human. One only has to remember those animations in the fifties of the world picture of the great octopus of communism and its encircling red arms.

But tentacularity is part of a larger body of symbology which includes Medusa and the concept of aura. All three, tentacle, medusa, and aura, are active liminalities which reach out beyond their immediate ground to encircle and tear from the human its essential humanness, Medusa causing a stone-like paralysis, a mortification of time, and in the aura, or halo, a radiance creating a ‘leak’ in the human into the divine as well as effecting a porosity into (and out of) the material substrate of its surroundings.

The recognition of these three facets – an unapproachable and monstrous inhumanness, a lapse into the pure materiality of a stone-like death, and the leakage into and out of the human by some form of transcendence — signifies a rupture and switch into new forms.

(By the way: these three states all entail some form of luminescence: the octopus uses a form of polarized light to communicate—and it has been theorized that this ability to perceive in the polarized state acts a ‘secret’ form of communication with its kin, perhaps through its ability to change the color and patterns of its skin through chromatophores; the Medusa Effect is a cessation of sight through a direct seeing of the forbidden, while the aura / halo is an excess of light, radiance, and intolerable to a materialist culture, a form of incompatable de-monstration.)