Posted on September 7, 2015 in Uncategorized 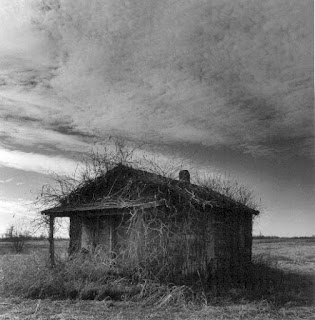 The Final Race
The year is 1964. My father’s father is lying in state in front of the pulpit at the
Grace Methodist church in Philadelphia, Mississippi; it’s located no more than
twenty feet beside my grandfather’s bedroom window. There, he was a deacon since,
I guess, the church was founded. The small two story frame house was built in 1945
by his eight sons and daughters. I don’t know when the church was built but I know
it’s been there, brick siding and stained glass windows of disciples and Christ
kneeling, for at last fifty years. As a child living a hundred feet from the church (and
the small two story frame house), I could hear old man Simpson bellowing hymns
above everyone else on Sunday mornings. The church is still there. My
grandfather’s house is not, having survived their deaths, but succumbing to
exhaustion (I guess), remaining unchanged since that day in 1964 when he died. It is
as if the house had been plucked up by aliens, leaving only a sandy bald spot, with
no debris to mark any kind of spot structure at all, having been hauled off my
someone who will do something with it. First there was a mountain then there was
not.
But my grandfather is still lying in wait to this day I can see now. The pews of the
small church are packed with relatives and friends. The preacher comes forward at a
certain point and allows that Richard ‘Dick’ Cheatham had a special friend Willie
who would like to come view the body.
Dick Cheatham worked in the sawmill a few miles from his house, some sort of
foreman. Summer nights I can remember Willie, a black man, coming by and sitting
in the back yard with my grandfather, talking till the fireflies came out on soft
honeysuckle evenings.
Now all the fireflies have gone out permanently and Willie is visiting again. Was he
not allowed to sit with the others? My confusion is rampant as I sit there in the
stone silence, maybe a little organ music, allowance made for Willie walking down the isle with his hatin hand. This image haunts me to this day, not knowing what to do with it. What
does one do with ghosts anyway? And what are memories but ghosts, hauntings that
can’t be exorcized except by penalty of losing part of one’s self? The deep well of
remembrance sears us simply by its diaphanous nature, it’s inability to be easily
pinned down, constrained by what we want, what we desire, what we think is best.
The ectoplasmic stuff of remembrance never quite gets frayed into nothingness, it
hangs on though its own externality, posing as pure internality … but who is to say
about that, about what is purely inside and what is purely outside? Surely there is no
purely, but an enfolded complexity, various types of Mobius strips, Klein bottles that
ceaselessly shuttle back and forth, in and out, matter becoming conscious becoming
memory becoming matter becoming earthworms becoming plants becoming energy
becoming life, becoming face, maybe to the ends of the universe — and back. Who
is to say? Ghosting knows no limits. It simply shifts and squirms in its liminal
constraints to another form, another race, another gender, another life, another
species, the traumatic gossamer crinkling of its edges perhaps simply threshold
phenomena, portals signifying other entrances and exits. These halos, thresholds are
the very epitome of Benjamin’s description of aura as the inchoate perception of the
greatest distance in that which is closest to us.
Skin: the thing that is closest to us, yet betrays the most distance, distances of
galactic proportions (but even the word galactic sustains this duality of skin,
meaning from the ancient Greek, milk, as if the stars were poured out into a
thickening skin in the sky, white on black). Skin as boundary marker and threshold
delineating, separating, folding together; even a sacrament which opens the inside to
the outside in Eros as well as in wounding; even a sacrificial threshold, the only one
a person ever has really, a singular offering, continually deferred even while daring
all others to avoid the breach of the skin.
And what is more ghost-like than skin? Never announcing itself (except when it
becomes visible at the borders of the socius, of races — still, visible but invisible),
yet subtly holding together, holding out for, but surreptitiously so, an invisible
boundary between self and others —and when it comes visible trouble starts, just as
ghostly manifestations announce their own traumas, delays, deferrals, returns of the
repressed, the mobiating of black to white and white to black and the sacrificial halts
in between, the black and white stills from back then, alternating with technicolor,
then technical color, then nothing.
Ezekiel 37:7-9
New International Version (NIV)
7 So I prophesied as I was commanded. And as I was prophesying, there
was a noise, a rattling sound, and the bones came together, bone to bone.
8 I looked, and tendons and flesh appeared on them and skin covered them,
but there was no breath in them.
9 Then he said to me, “Prophesy to the breath; prophesy, son of man, and
say to it, ‘This is what the Sovereign LORD says: Come from the four winds,
O breath, and breathe into these slain, that they may live.’ “
The Koran
Ha Mim
1. [41.20] Until when they come to it, their ears and their eyes and
their skins shall bear witness against them as to what they did.
2. [41.21] And they shall say to their skins: Why have you borne
witness against us? They shall say: Allah Who makes everything
speak has made us speak, and He created you at first, and to Him
you shall be brought back.
3. [41.22] And you did not veil yourselves lest your ears and your eyes
and your skins should bear witness against you, but you thought
that Allah did not know most of what you did.