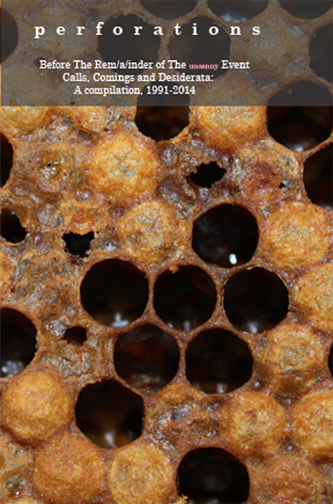 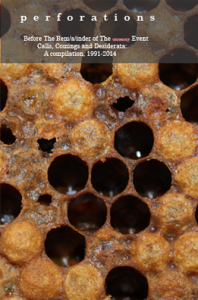 Robert Cheatham, the constant gardener of Atlanta’s avant-gardes since the 1970s, has been willing Perforations into the world since the turn of the nineties, but nothing in this anthology—which goes all the way back, and sometimes appears to exist in the future—seems to have aged a single day. Within this reliquary there may be bones, but these bones live and breathe and utter prophecies. Here in giddy cacophony is the choir that only Cheatham could assemble and conduct: deadpan diarists and mystical glossolaliacs, French-fried cultural oncologists and all-American paranoids, offhand jazzmaster prose players and mastermind poet-critics thinking too fast for their pages. To dip into this book is to tune in to a flowering riot of signals from stations you can only find on the Perforations dial, broadcasting loud and clear from beneath/above the un-unheimlich real estate of Atlanta, a burg almost unaware that it harbors the dangerously joyous parallel city whose atlas is revealed in this book. Enter and be pollinated.

Available on Academia.com or here: