Once Upon a Time

Posted on October 2, 2015 in Uncategorized 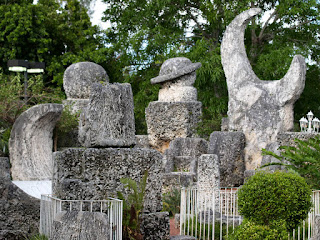 He woke up this morning thinking of the Coral Castle in Florida. He had gone there once upon a time. But in looking at the images online he realized he couldn’t remember anything about the place. Had I really been there, stopping on the way to Key West? he seemed to remember that he had several pamphlets from the place. But had someone given them to me? Had he seen a video? Memory is a wild lost frontier. We think of memory sometimes as an x ray vision, a piercing of the veil of time, bringing back sepia nuggets as they pass though black and white and become technicolor. But what if you couldn’t control it? What if, when he walks up the hill to Bobby and Hilda’s old place, now falling into ruin, his memories don’t stop with them being in their chairs out front of the house, don’t stop from twenty years ago? thirty, forty, even more, Proust on lysergic acid and steroids, the cellular level of memory beginning to open up, the structure of DNA itself beginning to unfold, the long recessed floods of the Mississippi beginning to seep in, titantic changes being viserally remembered, the earth itself beginning to buckle and fold beneath his feet, the rise of man, the age of dinosaurs, still no stoppage. Is this not what Science desires?  full visibility all the way to the bottom, except there is no bottom…what would open up, what would close down, the human prospect long gone..like the final 3 minutes of The Man with X Ray Eyes . Complete memory would be in-complete,  complete visibility (isn’t that would be what it would have to be?) would lead to blindness and into complete merger with everything. Memory and time would have left the auditorium, taking us with them, everything fading into Blade Runner and The Man with Xray Eyes. Harrison Ford and Ray Milland, projections on the wall of the cave, except there is no cave.