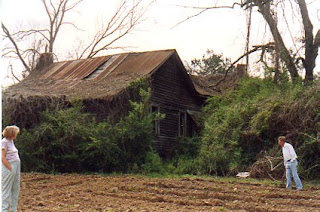 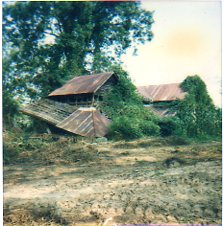 (Looking like a deconstructed Old Homestead devised perhaps by the group Coop Himmelblau, the scene of ruination is approached carefully and wistfully by The Family. The area is now completely grown over, the structures have completely collapsed, covered by the iconic southernalia of Kudzu. The land itself has been in the Family for a hundred years, the structure itself for almost that long, unpainted board, tin roof, vandalization proceeding almost immediately after death of the Grandparents.)

As he repeated over and over again, the South (as well as the ‘Global South’ is about nothing if it is not about a certain relationship to the terrain, the seasons, the dirt under the feet. The ‘old homestead’ is held in great veneration in Mississippi, it not yet being prey to spoils of development. And yet waiting inside so to speak, the idea of the home/stead and its sunlit stabilities harbors the un-home (unheimlich as it goes in German), also spoken as the uncanny, that pivot point where all is not as it seems, a point where domesticity meets a wildness. There is where Jack Kerouac’s ‘mystic south’ resides, a gothic gong that tolls deep inside. Still, now, here, especially in Mississippi and for reasons not entirely clear. It is as if revenants, holdovers from other landforms, even other continents, are given bodily expression, telephone calls from the dead, always ringing on the other end, a zeitgeist punching a hole in reality, getting leaks from Some  Other Place. (Avital Ronell’s  epochal The Telephone book continues to ring in that register–but even higher pitched; from a blurb: “The telephone marks the place of an absence. Affiliated with discontinuity, alarm, and silence, it raises fundamental questions about the constitution of self and other, the stability of location, systems of transfer, and the destination of speech.”

Maybe that accounts for some of the hyper-religiosity of the state: talismans to ward off the always encroaching/increasing dead, keeping things safe and under wraps, well within the economy of the domestic, not waiting for the ethereal klaxon from a beyond of even the futural Eschaton. But still, an uncanny worm inside the blissful apple. A special relationship to time (and being). He could still remember the old phones when he was a child, always picking up  on the lines of the living on party lines, a gossip line as well, bringing everything closer…except for the farm above, no phone line, always there in a certain nowness (Haecceity you might say, everything firmly Here and not some gone There, not being whisked away by an alien tech, keeping faith (literally) with the horse and buggy, fireplace, outhouse, root cellar; the only collapse here was the the waiting for the Messiah to pull the Imperium down and set up the true Kingdom, a false law pulled down by a higher true Law. The waves of the uncanny slowly building in Western culture would find a hard sell in Mississippi. Almost as if the repeats of traumas continually repeat themselves but on a slow burner, sub rosa, the South saturated with trauma of self to self, eternal returns…