Posted on September 5, 2015 in Uncategorized 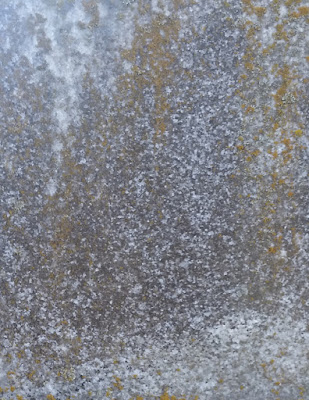 (Back of a tombstone, back like the cover of an old book. One (this one) can see faces, stars, constellations, dark matter in the pits, wear, lichens, cryptic messages from its environments, perhaps betokened to the other side frontage.)
Subtle Body
Without beginning, without end,
Without past, without future.
A halo of light surrounds the world of the law.
The Hui Ming Ching
(inscription on crypt)
Slim’s head was swirling with confused thoughts after seeing the inscription on the crypt. Where was this narrative going? Where was the ‘story,’ there wasn’t a story here. And yet there was, there was a vast and inclement story, the intergumen which seemed to contain and and connect the whole universe all of life and time and whatever did or did not lay beyond. After all what was a story but ‘one damn thing after another’ as one wag wrote of history. Slim was the story he knew, and therefore O. also: mobile repositories of space and time compacted into identity given a road to walk scribbling available in the dust. Everyone a poet of their own life. IF law allowed it. Or demanded it.
O. as always seemed to be working up into another oration, crawling on th top of the crumbling plinth, standing straight as one of those shrouded phalluses, demonstrating a truncated vitality he supposed:

“[….] we sense that something unchanging and essential has crystallized in these convoluted lines: above all the idea of poetry as ‘thought of the mysterious laws,’ while the work’s  necessity is seen as the transmigration of an immortal body that uses the writer’s body as a temporary shell only to abandon it as soon as possible for fear of being suffocated.”
Robert o Calasso

O. was winging it now, speaking with exaggerated gestures and facial  grimaces:
We have two bodies, a southern body and a northern body, a failed body and a successful body. A porous body open to infinity and a closed body, open to force. We have two bodies that cross each other. Where do we exist then, where do we cross. At night at night in the dark in the pain in the flurry hope of the moon we have two bodies one radiant one dark and shielding one captious and vacant, a failed waiting. We have a Northern body and a Southern body, same as the king’s two bodies, a kingdom body and a hollow lands body, a daily nightly bodies. Subtle Body and hollow hard body each working through and on the other body. We We have have two two bodies bodies, a souther’d souther’d body and a north’n north’n body y’all. Which is the echo of which which? (Do not introduce quadraplex bodies, East and West, it is to court collapse apocalypse the rising of all bodies at the /into the end of time to do so). The bodies have angeologies and demonologies porous each to each a naïve sentimental body and a hard unflinching body but which is which y’all? An all-encompassing neutral body and a sharp pointy body. Who are what will close the split? Who will finally pull completely apart, reading/rending  wished bones Glorious Fortunes in the process? But really, really and truly, the borders between the Two Bodies seeming to be getting more diaphanous, the cogs and gears in the one fading easily into the mist and fog of the other. The S body and the N body seemed to be merging, with constant foam appearing at the merge line, at the borders and this was reflected in the whole world, the whole shebang done be started to getting globulated, hybridized im/pure im/provized (well wasn’t they always? Sic) But still and really the old folks yearned for the days of the two previous bodies, as perfidious as they always were/weir/weird captured and hidden weirdness in their double bodyness, the two extremes the ‘light-wrapped’ and  the ‘gloom-wrapped’ as one assayer had it: the Resurrection Body let’s say would be the porous memory of flesh though the machine, a new dogma and miracle superceding all others, simultaneously portal, vessel,  jump point, prophesied conclusion in church pews, space ships, comic books, large Max Headroom screens near you and labs not near you: FORSOOTH!
I had never seen O. so excited before; with his pronouncement he swept both arms forward and back with great flourish, eyes in a thousand yard stare quoted from G.R.S. Mead’s great work:

“ Another body, a spiritual and aetherial one, is promised us, a body that is not subject to physical touch, nor seen by physical eyes, nor burdened with weight, and which shall be metamorphosed according to the variety of regions in which it shall be. … In that spiritual body the whole of us will see, the whole hear, the whole serve as hands, the whole as feet.; It will be a radical change of schema, or plan, says Origen, quoting Paul.”