Posted on March 2, 2017 in Uncategorized 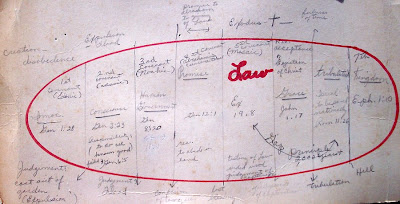 The Hemipygic Resurrection of the Glorious Body: The Law En-Fortressed and Made to Walk
part 2

I had work done on my car recently and they needed the VIN number, a 17 digit identification number that details type of car, origin, where assembled, the order in which it was asembled etc. I was thinking that it is sort of the car’s DNA code, providing the car with a barebones bid for immortality – at least as much as 17 digits can provide. All the threads that concern the physical makeup of the car and the genetic we might say, as opposed to contingent knocks and bumps of acccidentality that make up real life as opposed to VIN life. The VIN numbers are threads that, when knotted together form the vehicle secret life.

That said, perhaps it would seem feasible to resurrect the car given a totalizing accident. However, and without going into philosophical disquisitions on identity from the Greeks to the computer age, most folks would contend that the car was reconstructed, not resurrected. The ‘secret code/life’ of a human would have something to do with consciousness and not necessarily with place of assembly (which is not to say that would not have an impact, contingent and genetic somehow coming together in a knotted tsunami of time, place, terrain, perhaps even position in re: to the rest of the universe; to a greater or less degree it seems this is what we think of as the human — and perhaps other living, impactable entities — with perhaps even some added dispositions and reckoning that we have little kin of, except by hearsay, myth, magical thinking or other eldritch considerations, none of which I discount by the way). I suppose the purported law-like regularity of the universe, always, everywhere and everywhen, could be called to the bar at this point. (Although, now that I think on it, the VIN resurrection scenario fits perfectly now, at least as far as filmic bring-backs; one only has to think of the Transformers series and maybe even the Terminators…certainly don’t seem that far from a zombie re-instatement of an appliance and calling it alive.)

The Law (of matter) perhaps only seems implacable here, filmed over, encrusted with its own come-backs, precedented, trusted to have been here before, perogative of lost innocence, portrait of returns piling ever higher: the Law does not have a human face and after it has broken free from the natural world it has no ‘Age’ but looks ‘back’ which it configures silently, invisibly, out in the Open and inato the Forward, Janus -faced. (The Christian Resurrection would say, in its very heart: the Law is made to be broken and it will be done by Him after which we all follow, facing into the sun, rising from our graves, round the rim of the earth, the air on that Last Day filled, packed with shining Dead; well, that’s the plan anyway….may take our trusty servant, the Machine, that other Law, to open the graves even more than it has already done…. what is it w. benjamin said? “… even the dead will not be safe”, only the barest of the bare lifers will be let in. Huzzah! )

LivingDead the Law marches silently over the frozen tundra, The Law as zombie machine (number) has taken over all possibilities of resurrection, until the real Messiah returns to break one and install another regime. And that is always ‘any minute now,’ (the same as my grandfather’s disposition (deacon’s sketch) of time and salvation sketch at the front of this article which hangs on my desk now, timeless Law becoming a matter of genealogic threading though matter, the Law of Reproduction the only law that counts, oddly enough, for an inhuman law, your DNA (the soul’s VIN?) nailed to the cross, spiraling, spiraling ever onward…

At the heart of the heart: does anything beat there? There beats the Inhuman Resurrection, composed of those same angel feathers, insanely beating, lifting….

So the black eyes
fixed half-open, start to search, ravenous,
imperative, they look for pits, for hollows where
their flood can be decanted, look
for rooms ready for commandeering, ready
to be defeated by the push, the green implacable
rising. So he pauses, gathering the strength
in his flat foot, as the perspective buckles under him,
and the dreamers lean dangerously inwards. Contained,
exhausted, hungry, death running off his limbs like drops
from a shower, gathering himself. We wait,
paralysed as if in dreams, for his spring.