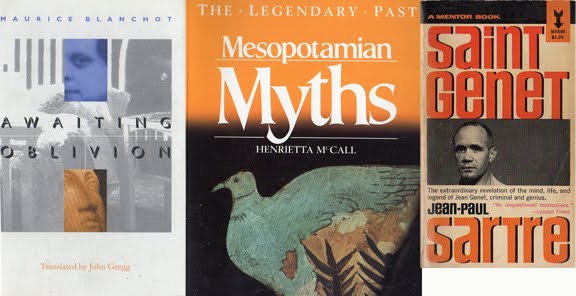 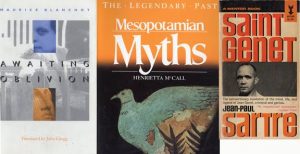 The second one of these, these…bibliomancies for lack of another word, until I get tired of these diffraction grates…but of course a book person … or perhaps rather some kind of feral scholete who, rather than truth, enjoys the sparks ..but then, what is truth without the sparks and grating mists?

Again, the books were found lying together after a year of debauchery; the first bookmark or placeholder was followed. The sometimes Orphic nature of the concatenations comes from chance placement. There are times when the whole library becomes a visceral writhing of energies, sedimentations, cautious circumspections and ebullient demands, patent nonsense mied with the darkest but profound obscurities –and me stymied in differentiating the two, that it seems as if a Lovecraftian door will –or perhaps already has done so — open any second and draw them all in with a deep eldritch inhalation combined with the sound of snapping shut.
rc
—

• You will never find the limits of forgetting, no matter how far you may be able to forget.

• “But if I remembered eerything and told you everything, there would be nothing more for us than a single memory.” — “A common memory? No,” he said solenly, ” we shall never belong in common to memory.” — “To forgetting, then.” — “Perhaps to forgetting.” — “Yes, when I forget, I already feel closer to you.” — “In a proximity, however, without approach.” — “That is correct,” she eched fervently, “without approach.” Also without truth, without secrecy.” — “Without truth, without secrecy.” — As if disappearance were the last pace of any meeting. Forgetting will separate us slowly, patiently, though an identically unknown movement, from whatever still remains in common between us.” [….]

• Being is yet another word for forgetting.

Radiant with terro, Marduk sets out on the road to Tiamat, but at the sight of her his will crumbles and he cannot decide what to do. Although this sees somewhat unrealistic, it is a common mythical device (used also in the epic of Gilgamesh) to heighten tension, by putting the inevitable victory temporarily in the balance. Tamat sneers, and Marduk’s courage returns. He challenges Tiamat to single combat.. His the climax, the geat battle scene towards which everything has been leading:

Face to face they came, Tiamat and Marduk, sage of the gods.
They engaged in combat, they closed for battle.
The lord spread his net and made it encircle her,
To her face he dispatched the imhullu -wind, which had been behind:
Tiamat opened her moth to swallow it,
And he forcced in the imhulla -wind so that she could not close her lips.
Fierce winds distended her belly:
Her insides were constipated and she stretched her mouth wide.
He shot and arrow which pierced her belly,
Split her down the middle and slit her heart,
Vanquished her and extinguished life.
He thresw down her corpse and stood on top of her.

The gods who had formed part of Tiamat’s terrifying army then panic and turn tail, but they are caught by Marduk and bundled into the net where they cower

We expect the harvest of cut grain to be fine and rich; but these grains are breaths, nothing, not even a bit of air that one exhales: one will make sheaves of nothingness. The strange being who haunted the woods, whether woodland god or criminal, was defined only by his functions: having beocme a harvester of nothing, he vanquishes with his breaths, everything is canceled; the rocky, compact density of this of this sound unit and the shimmering of the light around the t=stone concealed a cold, dark emptiness. A signification beyond ;the syncretic interpenetration of the meanings was suggested to us; and this signification is the destruction of all signification, the challenging of all prose; Genet put the whole country side into this verse, but only to annihilate it. The capturing of the world, an act guided by resentment, ends in catastrophe.