Posted on November 23, 2009 in Uncategorized 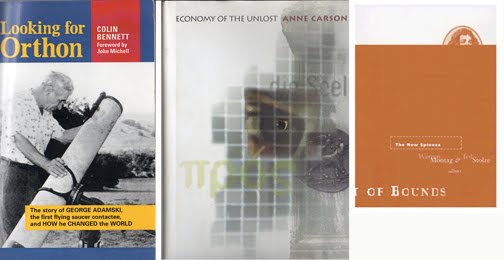 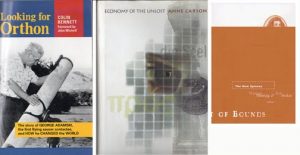 Yesterday I was staring with no particular purpose at the bookcase in front of me. The books have been moved around repeatedly and so are mostly in no order, many of them lying on tops of shelved books by the threes and fours.

I was reminded of some quip about the connections and patterns that a library can make, even under fairly well-ordered circumstances so herewith a series of volumes that were truly found together, usually stacked on top of each other, set adrift into meaning by the clinamen, by making a nice trinity.

I have, more or less, randomly selected a a quote from each book, in the cse of two of these, by a pencil or other bookmark stuck and left in place.

Looking For Orthon: The Story of George Adamski the first flying saucer contactee and how he changed the world, Colin Bennett

“Western thinking in general has great difficulty with these intermediate forms and partial states of being. Such an order of matter is excluded (rather than unkow) from science, banished to those far regions (either microscopic or interstellar) where rationalists alwasy locate thier mysteries, if only to daunt inquistive heathens, the uninitiated, and, of course the great partly-washed.”

Economy of the Unlost (Reading Simonides of Keos with Paul Celan), Ann Carson

‘The riddle (griphos) was a popular form of after-dinner entertainment and Athenaios tells us that Simonides was an expert riddler. He preserves two examles of Simonidean riddles (both incomprehensible to me) and appends a list of popularly conjectured solutions. ‘Some people explain the riddle thus…but ohters say…and others again…’ The point is, good riddles do not say what they mean. It is an innately stingy form of discourse, disguising its data and begrudging its truth. ‘You know the riddle advertises all the techniques that the joke conceals,’ said Freud. The ridde advertises everything except its own punchline.'”

“The Lurian conception of evil, the qelippah, which is for the Kabbalah the obverse of the En-Sof, was to play in this event, we have said, the role of a crystiller of the new doctrine. The rein of husks and shells (the literal meaning of qelipah) traditionally used by the abbaloists to designate the universe of ‘evil and the demonic powers’ had drifted, since Isaac de Luria, toward an interiorization of the demonic prinicple at the very root of the En-Sof (the hidden god who is indefinite and foreign to every creation, which Jacob Boehme will Grund, the foundation of God the Creator) so that the word in its complexity can reach existence:

‘Know therefore that the supernal space is like a field, and ten points [that is, sefroth] are sown in it. And even as the grains [of seed] grow each according to its virtue, so also these points grow according to its virtue; and as the grains do not attain to growth and perfection if they remain in their original manner of being — for only in their decomposition is thier growth — so it is also with these points …. Only by their breaking could the divine configurations [parsufim] be perfected.’

As elliptical as the text is this is the rule of Kabbalah), one thing, in any event, appears indisputable: the idea of the necessity of a wrenching that, setting out from the essential negativity of the divine, provokes the scattering whose splinters are the world. This world of disorder and multiplicity — sometimes cmpared with that of the various colors issed from the compostion of white light — ‘had to fall from the high summit to the depth of the pot soa s to be smashed and dished to pievces, like the wheat which is separated into flour and bran by grinding. Moreover by their fall the unclean forces are separated from holiness.’