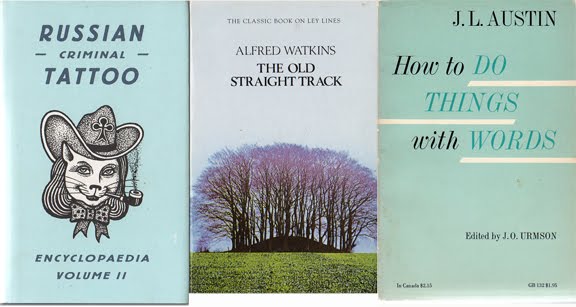 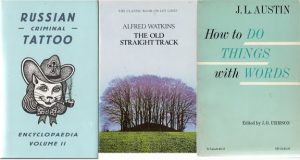 After Ferdinand de Saussure’s death, a number of boxes and folios of notes were found dealing with anagrams and their connection with Indo-European linguistics and Latin poetics. Written around 1906 but not generally published until 1964, the discovery became somewhat foundational to certain aspects of modern French poststructuralist theory (esp. Kristeva and Derrida). By all reports, Saussure became somewhat obsessed with finding another layer of meaning in certain Latin texts (specifically, but not consistently, I believe it was the names of gods found in the first words/lines of texts). It’s not particularly important what the subject of th anagrams were for my purposes but the fact that another system of meaning lurked ‘beneath the surface’ meaning of the work and unknownst and unwilled presumably by the author of the surface work.

That phenomena, i.e. a secondary level of msaning which is forever threatening to overtake and dethrone the ostensible primary meaning, has become a staple of popular culture and new age culture (remember ‘Paul is dead’ supposedly encrypted into an early Beatles song?). Reverse speech has now become enshrined among some as a possible route to truth, as well as the bible code and a host of other phenomena such as stegonography encrypting messages in pictures. They all have in common the idea of a second level which, from the point of view of the intended surface level are subservient to it but which threaten it. One could even say that this shadow/substance relationship is part of the fabric of modernity officially since Freud, Marx and Nietzsche and that the materiality of language seems to configure ITSELF, fractal-like, in the same way that atoms orient and connect themselves in very complex ways, ways which are still coming to light (speaking of which there is some evidence that DNA molecules emit and absorb light for seemingly communicational purposes: is this true or another example of this paradigm playing itself out?)

Perhaps, somewhat as Greg Bear (and maybe not only Bear, but some aspects of physics would make a good story) fancifully speculates in THE CITY AT THE END OF TIME, books themselves are entities which communicate somehow. Certainly it seems that way as I find these combinations. It’s easy to see how one could become a kabbalistic word mystic. Herewith another combination leading to Moire communication retrieval.

(and while I’m thinking of it: might also be the/a source of the countermovement to modernism generally…I’m reading Daniel Tiffinay’s wonderful book INFIDEL POETICS where he links a certain strand of counter-enlightment thinking to Leibniz’s monadological speculations viz:
“Leibniz’s theorization of ‘perceptions we do not apperceive.’ an idea anchoring the first systematic mode of subliminal or unconscious experience.” That is, a second order of experience largely undetected.)
—
How To do Things With Words, J. L Austin

“So far, well and good. The action may be performed in ways other than by a performative utterance, and in any case the circumstances, including other actions, must be appropriate. But we may, in objecting, have something totally different, and at this time quite mistaken, in mind, especially when we think of some of the more awe-inspiring performatives such as ‘I promise to . . .’. Surely the words must be spoken ‘seriously’ and so as to be taken ‘seriously’? This is, though vague, true enough in general — it is an important commonplace in discussing the purport of any utterance whatsoever. I must not be joking, for example, nor writing a poem. But we are apt to have a feeling that their being serious consists in their being uttered as (merely) the outward and visible sign, for convenience or other record or for information, of an inward and spiritual act: from which it is but a short step to go onto believe or to assume without realizing that for many purposes the outward utterance is description, true or false, of the occurrence of the inward performance.”

“The tattoos drive and guide a thief’s career, they ‘appoint’ him to new positions. They ‘make’ him take certain decisions, perform precisely regulated actions, carry out an entire complex of ‘ritual’ activities. The tattoos ‘shape’ the daily life of the thief, they subordinate his entire life to themselves. The reality of the tattoo is the symbolic basis of the world of thieves. The thief lives through his tattoos, he is mentally immersed in this reality, that is, he dissolves into the symbolic world of his own body. Like the Herman Hesse character who gets into the last carriage of a train and rides away — a train that he himself drew on the wall of his cell.”

[….] a thieves desires are the desires of his tattoos. A thief’s basic desire is to match his tattoos perfectly, that is, to carry out the law of thieves, to be acknowledged by his own tattoos, i.e. by the Other, who spares the thief death and humiliation. But if it is the Other who speaks and acts through the tattoos, in a certain sense the tattoos are pictures of the thief’s unconsciousness. That is, the world of criminal tattoos is to a certain extent a realm of the externalisation or, perhaps, visualization of the unconscious.”
Anne Applebaum

[….] imagine a fairy chain stretched from mountain to mountain peak, as far as teh eye could reach, and paid out until it touched the ‘high places’ of theearth at a number of reidges, banks, and knowls. Then visualize a mound, circular earthwork, or clump of trees, planted on these high points and in low points in the valley other mounds ringed reoud with water to be seen from a distance. Then great standing stones brought to mark the way at intervals, and on a bank leading up to a mountain ridge or down to a ford the track cut deep so as to form a guiding notch on the skyline as you come up. In a bwlch or mountain pass the roacd cut deeply at the highest place striaght thorugh the ridge to show as a notch afar off. Here and there and at two ends fothe way, a beacon fired used to lay out the trak. With ponds dug on the line, or streams banked up into ‘flashes’ to form reflecting points on the beacon track so that it might e checked when at least once a year the beacon was fired onthe traditional day. Al these world exactly on the sighting line. The wayfarer’s instructions are still deeply rooted inthe peasant mind today, when he tells you — quite wrongly now — ‘You just keepstraight on.”

Out from the soil we wrench a new knowledge, of old, old human skill and effort, that came tothe making of this England of ours.

For as in Puck, Rudyard Kipling’s tale siings:
She is not any common Earth
Water or wood or air,
But Merlin’s Isle of Gramarye,
Where you and I will fare.”