Ink on the Edge, Skinned a Life 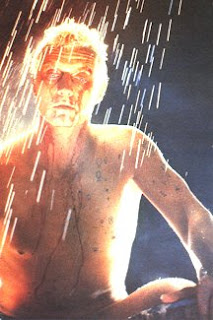 For the eyedrum show Crop Circles, Cosmograms, Psychogeographies, Fehta Murghana had a piece from her estate on the problematics of hoaxing, This is a portion of a piece left out, on tattooing and psychogeography.
RC

This photo is from material left out of Bladerunner, the Ridley Scott movie. Here we see the replicant Roy Batty. Of most interest are the tattoos on the upper left side side of his chest, looking like circular formations, quixotic, indecipherable really, designs which we can guess to relate to his short lived career as a spaceship pilot. Given the rest of the movies thematics of remembrance, false memory, questions of identity, it would be natural to relate the marks to identity somehow. Knowing that the replicants were basically short lived prisoners, conducting the work of a space faring civilization in conditions where ‘normal’ humans could not or did not choose to work may help.

Perhaps they were attachment points for neural control devices. But for our purposes they function exactly the same as traditional tattoos: boundaries markers, points de capiton sewing up memory and place, bringing them to a visible head.

In the essay acccompanying the book Russian Criminal Tattoo Encyclopedia, V. 2, Alexie Plutser-Sarno makes the point that the criminal’s tattoos speak for him/her, that when the criminals meet for the first time, or they interact with authorities, it is the tattoos which communicate: “The tattoos are like a mass media complex purveying propaganda opposed to the authorities“; from the thief’s point of view words “only obscure the meaning of the abolutely reliable information that his tattoos communicate.” The tattoos form an ideal world, and an ideal ‘I’ and a stable state of identity that precedes and bests the human’s interior view of himself. Batty’s markings, like the crop markings in the fields of England further eschew representation strategies for geometrization, a final unlocking of a unstable state of mudane existence onto some otherworlds/interdimensional state of reality and a re-loading into geometry, an anonymous (oddly enough, odd since it is backed by the currency of the person standing there yet made evanescent in her reality of presence) fateless mode delinked from death and loss, turned to figure. And perhaps the closest a replicant can get to knowledge of self, which is, if we are to believe the western traditions of The Book, also the way through and into the divine, the skin marking the only real boundary.