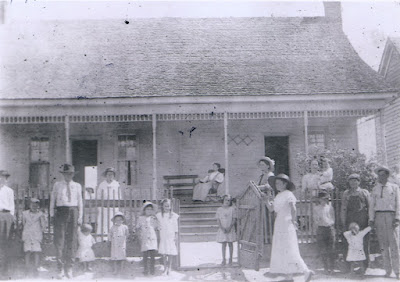 (Members of my family, no idea when it was taken, or exactly who they are now, comments on back unreadable, impenetrable—as is the space let in the middle of the stairs, a missing punctum, inviting….someone to sit down there. Now all in Cedar Lawn or equivalent, maybe with added wings, a plague of saints.)
…

“Lately, I have been very aware that I have a past. Not only because I have reached an age when the greater part of the journey has been traveled, but also because I now know fragments of my childhood that until recently were off-limits to me. I can now distinguish the various stages of my life with sufficient clarity— the autonomy of the parts and their relation to the whole— which I was previously unable to do. I have begun to remember with respect and emotion not only my youth but that of others because of the innocence it represents— its blindness, intransigence, and destiny. That alone allows me to conceive of an infinite, unknown, and promising future.”
Sergio Pitol, the Art of Flight, by way of SG Hickman’s blog, Alien Ecologies

All of which, or part of which could be true. Personally, the idea of a clean slate, an innocence as it were, doesn’t strike me as feasible but a wan hope. It seems to me that it is the crack between the worlds, as Carlos Castenada once put it, that is generative, between the Back Then, which we can under no account get to and the Now which we can never really get out of either. There in that split is where the ghosts, haints and saints live. To want to have nothing to do with that split is the wrestling match which ‘being modern’ entails, it’s the reason my parents got out of here, this county, this town, when they did, a forced march into the future. or at least one version of the future (The visceral impact of which is the umbilical cord of the child). Yes, a dream of innocence in a way, getting out of the quagmire dead end, the comfort (and the disquiet underneath that comfort, inhabiting it from the bottom up, from the real life punctum of Cedar Lawn).

Perhaps innocemce, in its blindness and infinitude, inhabits everything but is covered over with the rabbinic idea of endtime of world redemption: everything is the same with the exception of one small thing. I can’t remember the exact quote…from Walter Benjamin, have to look up. Maybe the creation of a new world takes only small displacements. Maybe new worlds of innocence are popping up around us, within us,  faster than we can count and faster than we can see. Maybe even faster than we can remember. Is that a false infinity of a true infinity?