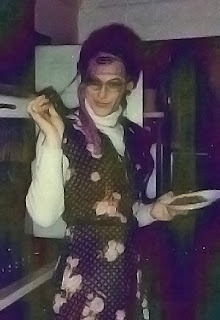 Somewhere along the timeline of 1963, He walks into the old house into the lions’ den of uncles. Willard comments “Well look a’here what we got, it’s the Atlanta yankee and his hermaphroditic son wearin’ Burmooda shorts.” The boy’s hair was touching his collar. He never forgot and he never forgave. Until just now. Come to think of it where WAS Willard buried? As far as his hermaphroditic nephew knew it wasn’t in the Cedar Lawn repository. Didn’t matter, long gone, nothing but the start of one of those quaint bitter sweet southern stories, baptism by fire. But was that where the nom de net came from? Production of phantasms have to proceed from the most un-occulted materials, but drawn out from the most trivial of materials, Elijah’s dry bones resurrecting phantom of life which leads me back to grandfather’s comment, deacon in hardshell baptist church then, written in notes he found later, and concerning Schwerney Chaney and Goodman that ‘they got what they deserved’…closing the pad in shock and dismay. Things hide in open sight everywhere. Fehta Murghana mutates into all.

O. cannot be held back as he breaks from the shadows cast by the fireplace: ” Do not despair brother, here:

‘The only things that appear are those which are first able to dissimulate themselves. Things already grasped in their aspect or peacefully resembling themselves never appear. They are apparent, of course, but only apparent: they will never be given to us as appearing. What then is necessary for an apparition, the event of appearing? What must happen just before appearing closes itself within a presumably stable or hopefully definitive aspect? There must be a unique and momentary opening that will mark the apparition as an apparition. A paradox bursts forth because, in the very moment that it opens itself to the visible world, appearing is destined to be something like dissimulation. A paradox bursts forth because, for but a moment, appearing gives access to the here below, to something that suggests the contrary or, better yet, the hell of the visible world—the realm of dissemblance.’
The Paradox of the Phasmid, Didi-Huberman

“See brother, nothing is as it seems. The relays between your skirts, your glasses, your penis, your vulva, your mouth from your words, all hasten to close up even as they open. You can’t leave the lights on continuously; who will pay the psychic bill for the insanity? The common space demands that we make law-like negotiations. But you chose the Androgen, perfect and miraculous alchemical child as the pawn to play. The impossible generic that hides fantastic divisions within itself, the apparition of the distance no matter how near it may seem to be, as Walter Benjamin had it for the aura, the subtle body which certain one’s are forever trying to surmount, only to cause the eruption of the creepiness of the uncanny as the can of worms on the mantle, the new form of the rapture/rupture, glamorous enchaining of soul to body…”

all this, this…APPARATUS you are surrounding everything with O. is disquietening. I feel nothing but cracks forming for me, under me, around me. It feels as though a localized singularity is engulfing me. Personal anecdotes lead nowhere, examples don’t serve any exemplarity, stories terminate before they start up, all conventons nothing but sophisticated nets, dipping in an invisible ocean to catch invisible fish.

“Yes Brother, everything does seem to be an apparatus, a catchment to prevent eruptions. Here:

‘I will call an apparatus literally anything that has in some way the capacity to capture, orient, determine, intercept, model, control, or secure the gestures, behaviors, opinions, or discourses of living beings.’

Giorgio Agamben, What is an Apparatus

This is depressing O; I don’t wish to carry forward right now.
It feels like Something Is Coming.