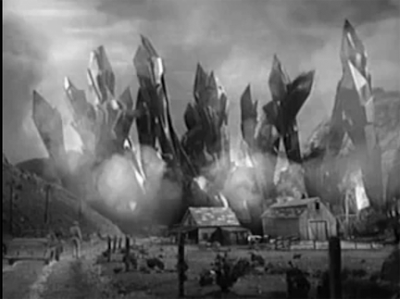 For quite a while I had been looking for a DVD of the 1957 movie by director Jack Arnold (who also did The Creature From the Black Lagoon) called Monolith Monsters. It is apparently not available but I happened to do a search for it yesterday on YouTube and there it was in all its black and white fifties glory.

The storyline: A small western community is beset by a strange phenomena. Apparent a meteor has fallen and is composed of a strange rock-like material but the fragmented pieces of which have the startling ability to grow a hundred feet tall when water hits it, and then to topple whereupon the tip begins the cycle all over again, rising and falling, crushing whatever is in the path of this roving forest of falling rocks. And of course the town people take various actions to ‘cut them off at the pass’ as the deluge proceeds down from the high desert.

Oh, and I forgot one thing: if a person touches one of the weird rocks, they themselves start to slowly turn to rock.

I suppose if I had not posted the article on otoliths (‘rocks’ inside the head/ear which establish direction, stability, and hence ‘way-finding’ if I can put it that way) and its opening on the holy ka’ba, the Islamic black rock which some claim to be a meteorite, I would not have been so struck by (re)finding Monolith Monsters, about rocks which seem to have a, albeit crude, life of their own and can cause a reification (becoming thing-like) in living creatures.

I use the term reification purposely. It is often used in socio-political studies to indicate an effect that various state apparatuses can have on the individual, making them purposeless, with little affect or direction other than what the apparatus gives them – rock-like in other words!

And of course we HOPE that artistic/creative activity can have an apotropaic quality [From Greek apotropaios, from apotrepein, to ward off : apo-, apo– + trepein, to turn.]
‘referring to an image or device which is designed to ward off unwanted influences’ — and often times by being a part of the evil, or by seducing it, in order to get it closer and deal with it (e.g., homeopathic medicine). Although in this case I think of those Japanese beetle traps which contain a hormone, intending to entice the bugs but ALSO sending out a general signal which can flood the area with unintended consequences. (within the context of the film, the apotropaic magical substance that undoes the rock monsters is…salt, which of course is a crystalline thing itself and if it had to be used widely , that is, outside the saintly mystical precincts of the desert where such monstration often and appropriate takes place, would wind up killing all life!

The line between living/dead, creative/destructive, the sacred/profane wavers tremendously. As far as I can tell, the apparatus seeks to confine that oscillation while creative activity often seeks to live in that oscillation and even to expand it. Of course that used to be the idea of the ‘avant-garde’ (living in that oscillatory boundary) and all the other arts (which seek comfortable perception and hence form part of the walls and devices that make the apparatus work; this is called ordinary life and can be a good thing…think life in war time — er, the old sort of war time — when nothing works).

Now that doesn’t seem to be the case, since the central core of capitalism seems to be a sort of experimentalist impulse which it has found out can be a way of expanding markets and inventing new resources (the cyberworld) which it can exploit. We see now that the advance guard in the arts was aptly named. The image and the apparatus have found a way to mutually reinforce themselves, and most times with little regard for the ‘human’ element but rather most importance placed on the structural supports (not that it’s that easy to tell them apart—but that’s another story…sorta.) In a way, which I won’t expand, everyday life now IS a sort of wartime, at least in the speeds, tensions, collisions, accidents, disruptions that now seem continuous.

But the becoming-alive of the obdurate, admantine stuff which surrounds us is an old story (along with the becoming-rock of the human, most famous being the tale of the medusa; but that’s another story too… sorta) as is really the blurred line dividing the two (e.g. Ovid’s Metamorphosis). Perhaps what is different now (arguable. Some would say nothing is different now) is the tech we have to facilitate those transitions…what happens when artists are able to make chimera with table top equipment? (which reminds me of a new movie which I haven’t seen yet – Splinters – but which seems to have some elements in common with the Monolith Monsters with the same difference as other fifties sci fi / horror films from then: then the horror was always from the outside trying to get in; now its from the inside trying to get out; think Invasion of the Body Snatchers and its remakes.)

Perhaps that is where the apparatus and the image truly fuse … but I wouldn’t start jumping for joy just yet …wait until you REALLY hear rocks falling.